Loss of vision poses extraordinary challenges on individuals in our society which relies heavily on sight. Currently there is no effective treatment for some patients who are profoundly visually handicapped due to degeneration or damage to the: 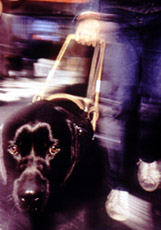 This project aims to develop prototypes in the field of visual rehabilitation and to demonstrate the feasibility of a cortical neuroprosthesis, interfaced with the visual cortex, as a means  through which a limited but useful visual sense may be restored to profoundly blind people. Even though the full restoration of vision seems to be impossible, the discrimination of shape and location of objects could allow blind subjects to ‘navigate’ in a familiar environment and to read enlarged text, resulting in a substantial improvement in the standard of living of blind and visually impaired persons.


Several laboratories worldwide are developing microelectronic prosthesis intended to interact with the remaining healthy retina or optic nerve. However the output neurons of the eye (ganglion cell neurons, which in turn give rise to the optic nerve axons) often degenerate in many retinal blindnesses and therefore a retinal or optic nerve prosthesis would not be always helpful. We have decided to work on stimulation of the primary visual cortex because the neurons in higher visual regions of the brain (visual cortex) often escape from this degeneration. If these higher visual centers can be stimulated with visual information in a format somewhat similar to the way they were stimulated prior to the development of total blindness, a blind individual may be able to use this stimulation to extract information about the physical world around him/her. This concept is supported by several studies, which demonstrate that localized electrical stimulation of the human visual cortex can excite topographically mapped visual percepts [Bak et al., 1990, Brindley et al, 1968, 1972; Dobelle et al., 1976, 1978, 2000; Heiduscha and Thanos, 1999; Normann et al., 1999; Schmidt et al., 1996]. 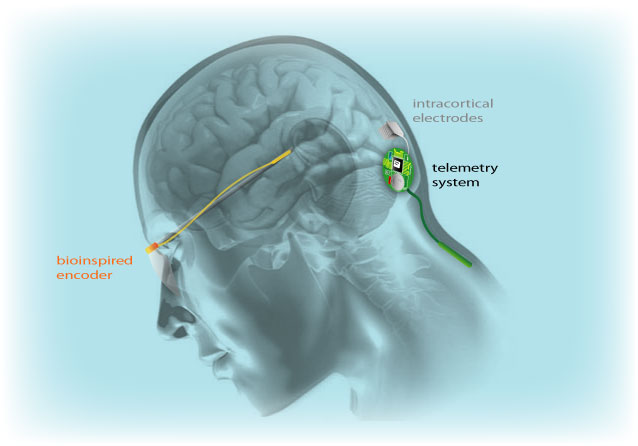 Schema of a Cortical Neuroprosthesis system


The above figure illustrates the basic components of our approach (Cortical Visual Neuroprosthesis). The whole system will use a bioinspired (retina-like) visual processing front-end, able to transform the visual world in front of a blind individual into electrical signals that can be used to excite, in real time, the neurons at his/her visual cortex. The output information from this bioinspired peripheral device, will be used to stimulate an array of penetrating electrodes implanted into the primary visual cortex. Such a visual neuroprosthesis is expected to recreate a limited, but useful visual sense in a blind individual who is using such a system.

We are developing reconfigurable multichannel neurostimulators (128 channels) able to drive different current injections and waveforms through high impedance electrodes as well as a multichannel transcutaneous power and data radiofrequency links to the intracortical microelectrodes. The safety and efficacy of permanent charge injection through multiple intracortical electrodes into cerebral cortex is being studied using histopathological and physiological techniques. We are also using transcranial magnetic stimulation (TMS), MRI and fMRI to study the degree of remaining functional visual cortex in blind subjects.

The following functional magnetic resonance imaging (fMRI) study displays the areas of the brain that are activated when a congenital blind person reads Braille letters using our fMRI compatible Braille Stimulator. The areas of activation (displayed in red) are not restricted to the somatosensory cortex cotralateral to the right hand used for reading. Rather, there is marked activation of the occipital cortex, the part of the brain that we use to process visual information. 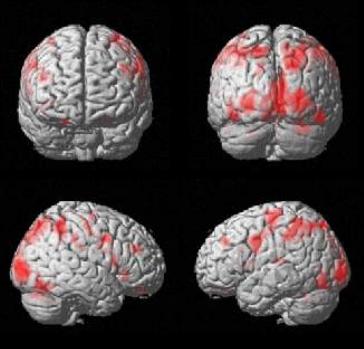 We are using these non-invasive techniques, to understand the plastic changes in the brains of persons with visual impairments. Thus, a requirement for clinical application of a cortical prosthesis, aside from safety considerations, is proper, non-invasive patient selection criteria. The primary visual cortex of potential candidates for such neuroprosthetic devices has to be capable of processing visual information, i.e. not have been plastically transformed to process tactile or auditory information. Therefore, the precise understanding and modulation of neuroplastic processes related to the cross-modal transfer of tactile and auditory information to the visual cortex is a critical prerequisite for the implementation of any visual neuroprosthetic approach. In this context one of our goals is to develop a methodology to measure the degree cross-modal plasticity in blind subjects. Another important objective is to develop a methodology to identify the preferred location for the neuroprosthetic device.

The results from this project will provide information regarding neuroprosthesis not presently available, as  well as new information about the plastic changes in the adult nervous system, which has implications for rehabilitative training and device development. If we can understand more about the fundamental mechanisms of neuronal coding, and to safely stimulate nervous system, there will real potential to apply this knowledge clinically. Although we are still a long way from a perfect visual prosthesis, the success of the cochlear implant seems very promising also for this neurotechnological application.

Dobelle WH, Mladejowsky MG. Phosphenes produced by electrical stimulation of human occipital cortex, and their application to the development of a prothesis for the blind. J. Physiol (Lond) 243: 553-576(1974).

Dobelle, W.H. Artificial vision for the blind by connecting a television camera to the visual cortex. ASAIO Journal 2000; 46: 3-9.